We were called out to take a look at a very old air conditioning system in a restaurant in Chesterfield. The system hadn’t worked for years and the owner wanted advise on the best course of action. The previous year had faced them with several bad reviews from customers due to the uncomfortable temperatures in the restaurant during summer and they didn’t want a repeat again this year. 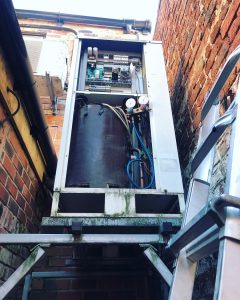 The system was low on pressure & on R22 (a banned gas) not only this but the unit had several other faulty components. We proposed to remove the current unit and install a replacement air conditioning system, the new Midea system would not only be a higher power, but also much more efficient than the last. This will provide better performance and lower bills!

To keep disruption to a minimum the installation was carried out “out of hours” – this meant that there was no loss of trading for the restaurant. After decommissioning the old system, we had to cut out the ceiling back of house and remove the ducted unit from inside the void. In its place we then fitted the new indoor unit and altered the pipe work and ducting to suit. The old condensing unit was very large and required a genie lift to remove it and then install the new one. After commissioning we re-boarded the ceiling and had it professionally plastered.

The new system was up and running within a few days, giving the restaurant heating and cooling for year round comfort, alongside our 5 year warranty for peace of mind for our client.

Get In Touch Now

Or email us at: sales@chillairconditioning.co.uk

Or get in touch using the form below

Keep up to date with our latest news and promotional offers

Find us on Rated People and Quotatis today!